We always knew the day from Dien Bien Phu into Laos was going to be challenging and it didn’t disappoint.  To cross over the border from Vietnam to Laos we had a climb of 1100 m on some dubious road.  Steffen was a little nervous about the border crossing having read too many horror stories online– Max and I were blissfully ill-informed. We tried for an early start, but again our plans were dashed when our laundry disappeared.   I was convinced it was a sign from the Gods for us to take another rest day; Steffen was a little more level-headed and solved the mystery of the missing clothes.  The climbing  started early on our ride.  The road was steep with large sections of the road  in very bad condition – much of it under reconstruction; little bitumen, typically rock with 5cm of powdery dirt on top.  I found the trucks on this stretch of road pretty scary. Because the road was so narrow and in such a rough state, more often than not we had to pull off the road to let them pass (who’s stupid enough to play a game of road chicken with a semi trailer?  OK, I did it once and I learnt my lesson 😳).  The road became increasingly unpleasant (hot, dusty and busy) until we hit a large line of trucks and a number of policeman.  Closer inspection revealed a semi-trailer which had slid off the road, down into a ravine.  After watching several semi trailers come flying down the road and skid along the dirt as they tried to slow to pass a truck in the other direction, I guess it was only a matter of time.  It looked horrific, but we later learned that the driver survived.  Much to our good fortune, this meant that the trucks got stuck waiting until a bit more of  mountain had been scooped out to make a wider crossing- so that was pretty much it for trucks for the rest of the day.  Awesome luck!  Two hours and $100 later we had crossed into Laos and made our decent through lush green forests  to the township of Pang Hoc. We saw another accident involving a semi trailer and a 4WD just as we were about to enter town; another reminder to be cautious on the roads! Steffen was so startled by the incident that he rode into a big hole and got a (another) flat.

After a good sleep and an excellent meal of tasty noodles, pungent papaya salad and delicious black sticky rice we headed off to Muang Khua.  The ride was lovely with an 800m climb through really pretty villages, again not well visited by tourists. It was on this ride that Steffen asked Max and I whether we were still enjoying the riding as he had noticed that we didn’t seem very enthusiastic about the day.  It was when Max suggested he was going to write the next blog entry as “SOS: Get me out of here, my parents are psychopaths” and I suggested “I like mountains, just not every f#$*king day” that we realised mountain fatigue had set in.  The allure of a hard climb through beautiful villages followed an exhilarating descent had lost its lustre. We were longing for some flatter country… maybe something coastal, or better still, a delta.

The timing of our mountain fatigue couldn’t have been better as it was time to take us and our bikes on boat trip down the Nam Ou river from  Muang Khua to Nong Khiaw.  There had been a bit of speculation as to whether this trip was still possible.  It has been very dry here and the water level was low but also the river dynamics are changing as there is a lot of hydroelectric dam development along the river, made possible through Chinese investment.  Time will tell, but there are fears that the damming will have a large impact on the village communities along the river as they rely very heavily on the river and especially the fish.  I have a feeling the villages will adapt, but I guess something will also be lost.  We had a fun and highly adventurous day on the boat.  The journey was said to take around 5 hours and took us through some rapids requiring quite a bit of skill to navigate.   The journey length itself is approximate as the boats primarily ferry goods between villages.  We had many stops were bags of goods were exchanged and at one stage a thrashing gigantic fish (Max sized!) was boarded and then dropped off a few villages with a set of scales down for some fishy trade.  About an hour out from our destination, the boat failed to restart after dropping off a passenger.  The captain was very resourceful and dismantled and reconstructed pretty much the entire engine and coaxed the it back into life for another kilometre until black smoke started pouring out. Despite another four hours dedicated to engine rebuilding with liberal sprinkles of cussing, our Captain gave up a had us swap into another boat just as it started to get dark.Throughout the rebuild shenanigans we were truly adrift, floating past fishermen hauling in their nets, bumping into limestone rocks and as the evening fell we witnessed  folk at several separate villages meet down at the river in the evening and wash themselves laughing and chatting – once even spotting a group of young Buddhist boys hanging up their saffron robes before noisily jumping into the river.

We finally arrived at Nong Khiaw feeling tired but happy and foraged around town to found ourselves a well deserved dinner and a place to sleep.  We awoke to find ourselves in a ridiculously pretty river village and decided to stay a few days to give ourselves some we deserved rest.  Nong Khiaw has a healthy dose of tourism, meaning an opportunity for western extravagances and some fun outdoor adventures.  We’ve been canoeing and spying on the villages from afar (I’ve fallen in love with their tiny pigs and water buffalo), walked up the hot, wet forest of Phadeng Peak for a beautiful sunset, visited a cave (Tham Pha Thok) which was used as a hideout in the second Indochina War and stuffed ourselves stupid with good food.

Tomorrow we set off again on our bikes for a tiny bit more adventure before stopping at Luang Prabang for Christmas. 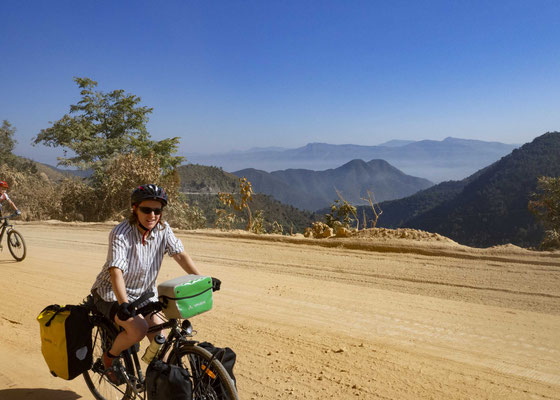 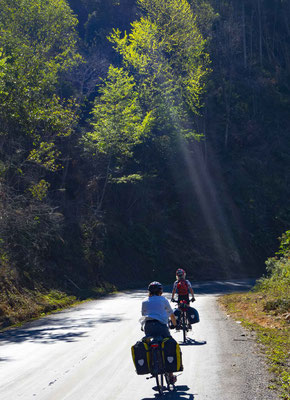 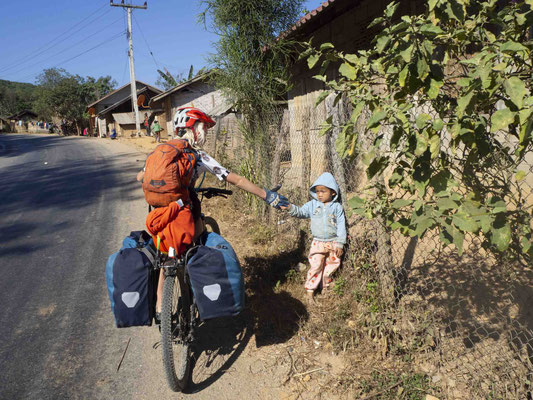 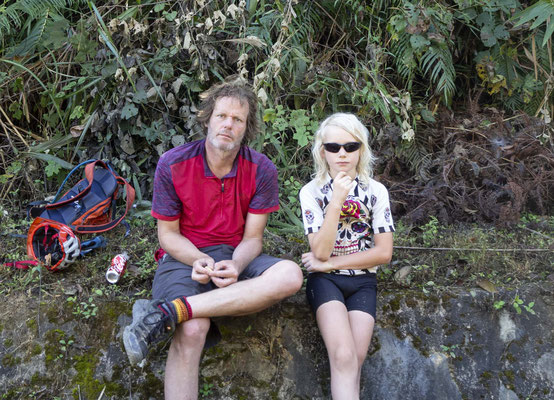 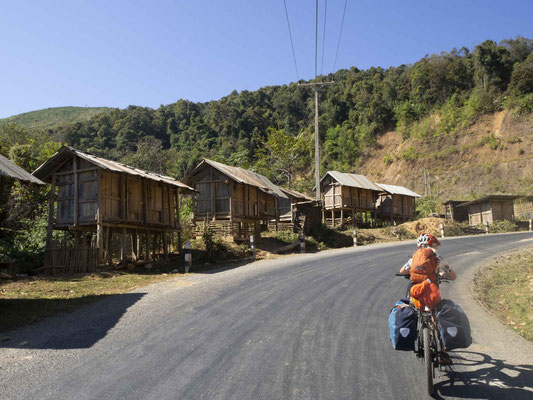 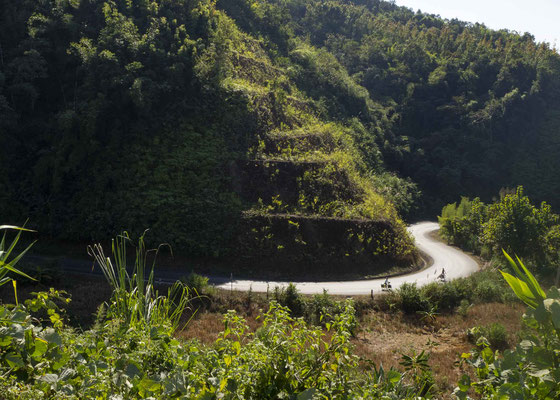 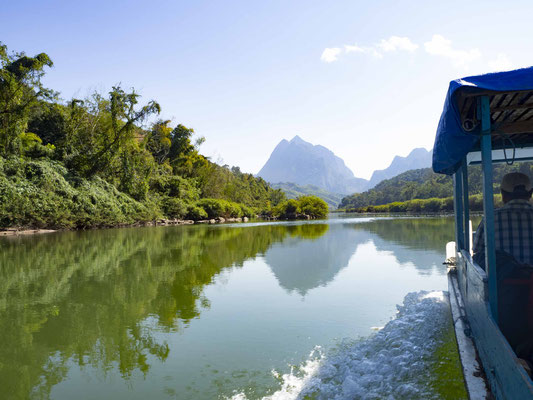 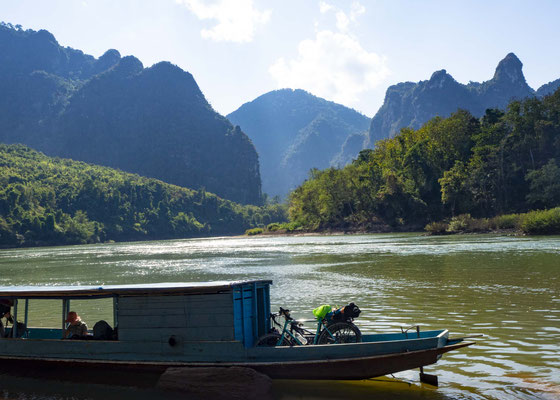 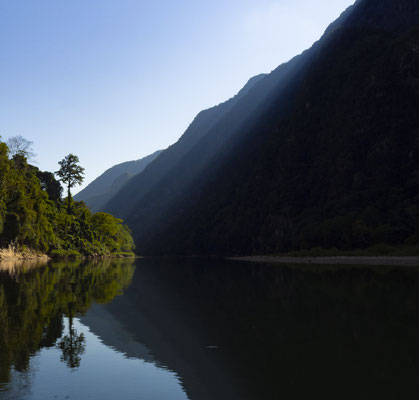 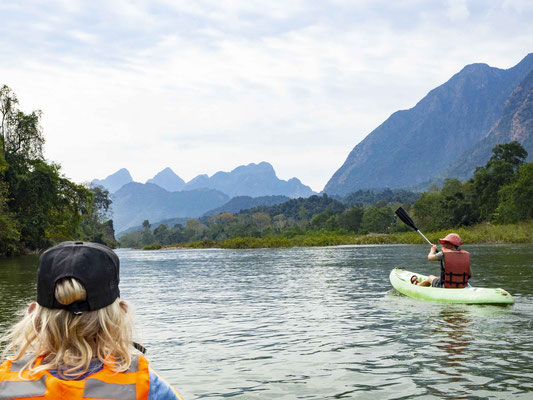 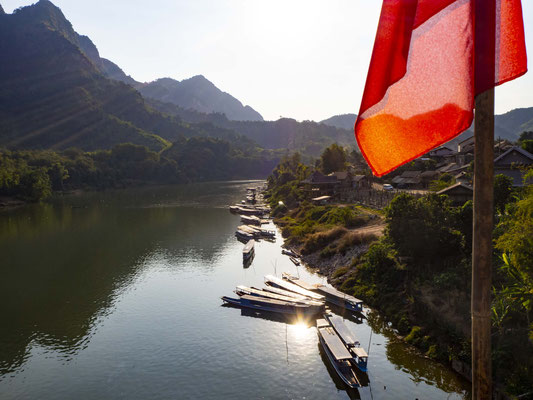 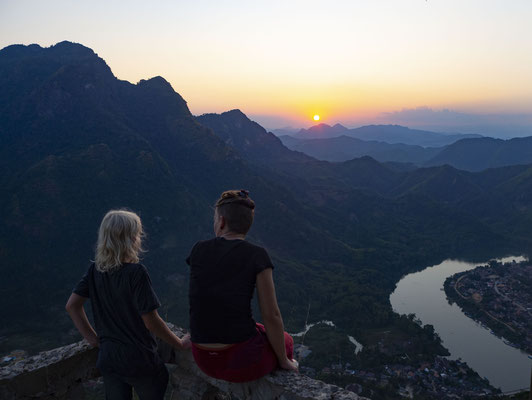