We set of for our last few days in Cambodia to the Cardamom Mountains;  the largest protected high quality jungle in South East Asia. Lively debate was had on the pleasant road regarding the increasing number of ominous multi-storey buildings that we had started observing in little towns and along the road.  They had strange little triangular windows on the top and were omitting a high-pitched bird-like squealing (think audio from Alfred Hitchcock and visuals of Shaun Tan).  We’re they chicken torture chambers (but where were the doors?), satanic ritual dens (but why multi-storey?) or a weird wellness inspired health camp (why were they so horrible?). We were really puzzled and they were really unnerving.  Turns out that they are bird nest factories (swallows or swifts), for bird nest soup.  They are still really creepy.

I was really keen walk through some “real jungle” and and experience a part of Cambodia that wasn’t busy, dusty and under development.  We’d heard about a community driven eco-tourism project in a place called Chi Phat.  It is a fairly autonomous community-driven project set up by the Wildlife Alliance – an NGO in North America.    The concept of the Wildlife Alliance is to provide an alternative income stream for the local communities other than hunting and illegal logging through tourism and  guided tours.

The village of Chi Phat was a lovely two hour boat drive through beautiful, green and lush rainforest.  We stayed in a lovely traditional style wooden hut with a thatched roof and came with many chickens, several dogs and a few cows.  Every time we attempted to leave the hut quietly, children from next door would rush over screaming hello, hello, hello and expect to be high-fived (very cute, though not so cute when they came into our hut to play the same game while we were sleeping or lazing).  In the spirit of experiencing some “real jungle” and supporting the project, I signed the family up for a 2 day guided tour.  I had done something similar in Vietnam (thinking of you Toby and Matt) and expected that the “boat ride, bird watching and jungle tour” to be nice, but very safe and a little bit pedestrian.  Steffen or Max were not completely convinced of the tour but they were very kind and agreed to accompany me.

The (very early) morning boat ride was beautiful with mist rising off the river.  We putted up a smaller tributary watching tiny schools of fish jump out of the water, otters screaming and hornbills looking a dopey flying through the sky with their enormous beaks.  When the river thinned, we jumped into smaller boats and were paddled up the circuitous river to the start of our walk.  Our guide proudly told us that this walk was his design and it was only the second time that he had hiked it with tourists.  Much to my surprise the jungle path (once we found it) was totally “real jungle”.  It had very recently been cleared local villagers with machetes,  so it was not really a path, more a series of marked trees with some of the thinner saplings cut out at worryingly sharp angles.  We tripped and stumbled the whole way, hoping that we wouldn’t impale ourselves on one of the sharp sapling stumps.  Our guide was a delight – a young man whose father was once a hunter and who had gone on many hunting trips himself as a young boy and teen.  He’s learned so much about the forest from these hunting trips and he wielded his machete in an amazingly efficient and precise manner. We saw turtles, monkeys, crazy “popcorn” insects (nymphs) with white hairs that pinged off the branches when we got near.  We heard the gibbons calling in the trees, saw tree snakes, found a tree that is “milked” for it’s yellow dye, ate some delicious fruits and saw pitcher plants in their natural habitat (yep, very cool Goldie!). At lunchtime we came across a small pool in a river and our guide set to making us a cooked lunch.  A cook also came out on tour with us!  The cook jumped into the water hole and pulled out a net to catch fish for lunch.  Somehow, between the cook, the guide and the machete, a fire was built and  a delicious rice and fish dish for us.

Fully sated, we set off again for our evening camp.  In the afternoon we hit a  few weird patches in the jungle, where it was drier, grassy and with obviously different tree species.  Our guide showed us what looked to be a cleared area with bone fragments in it and told us that this was once a Khmer Rouge camp. Once the Khmer Rogue were defeated by the Vietnamese army Pol Pot and co hid in the Cardamom mountains for a good decade more where there were regular skirmishes between the Khmer Rouge and villagers.  We heard that the  bones were human remains that had been burned on a pyre – a gruesome reminder of how catastrophic this period must have been for the local villages.  By the time we reached our evening camp, we were all exhausted and glad we’d seen so much (and managed to avoid impaling ourselves).  Again, our guide and cook did their voodoo magic and set up our camp – setting up our hammocks, creating a wooden frame for our plastic sheeting roof, along with clothes racks and all sorts of useful things out of wood and vines.  They cooked us up a hearty soup, with  fish and papaya salad and we nestled into our hammocks just as the rain started

hammering down (our first rain in three months, of course it  happens when we are camping outside).  It was great to hear the rain and we able to remain  fairly dry.  Just as we were about to drift off (Max and Steffen were deep asleep in minutes) the guide (his name is Janda by the way) called to me to ask whether I had snake bite medicine.  Janda was bitten by a snake. Long story short(er) we bandaged Janda up (he had no first aid kit) and walked out of the camp in the middle of the night for a few kilometre to a river and were whisked off by the local ranger in a speed boat back to Chi Phat. It was a truly wild “real jungle” experience.  Luckily for our guide, the snake mustn’t have been too poisonous, and he recovered the next day.  It could have been so much worse as there is not really any anti venom in Cambodia and snakebites are often fatal or require the loss of a limb.

Max and Steffen have quietly suggested that they might not accompany me on my next jungle trek.  We found we’d developed a real fondness for the community and we were sad to leave such a fabulous place.

The roads from Kampot to the border were the nicest that we had ridden in Cambodia.  In hindsight, Cambodia may not be much of a bike tour destination but the last sections of road were pretty, green and quiet.  We stayed our last night in Krong Khemara which is right on the border to Thailand.  It was strange town with a large main business street with a disconnected and completely haphazard arrangement of houses (mostly half in water) without much in the way of infrastructure…like roads, sewerage, rubbish removal.  A bit of town planning might not go astray here.  The strangeness of the town was only amplified in the morning as we rode towards the border coming across a crime scene with a dead body in one of the main streets.  It really felt time to leave Cambodia. 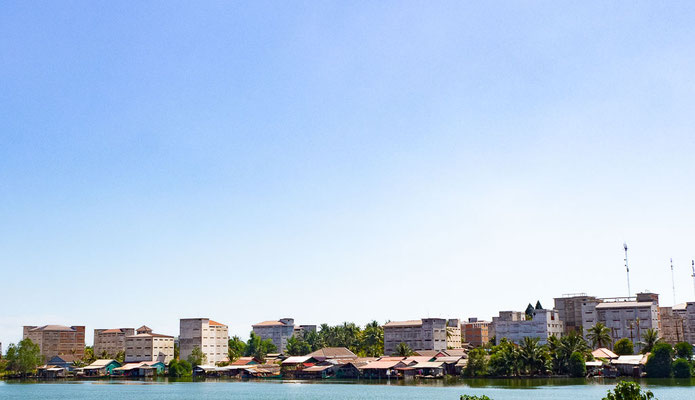 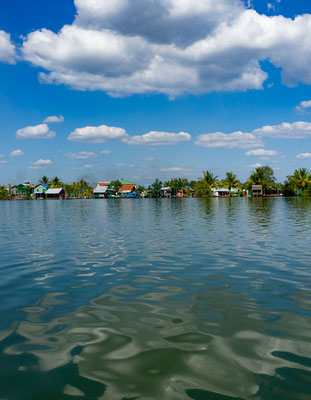 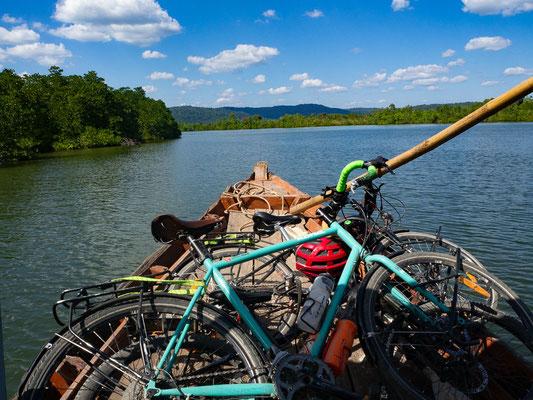 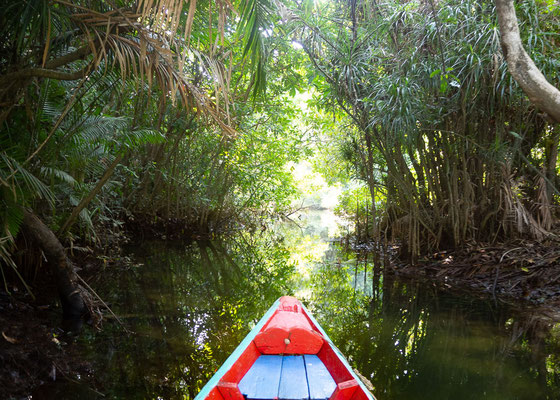 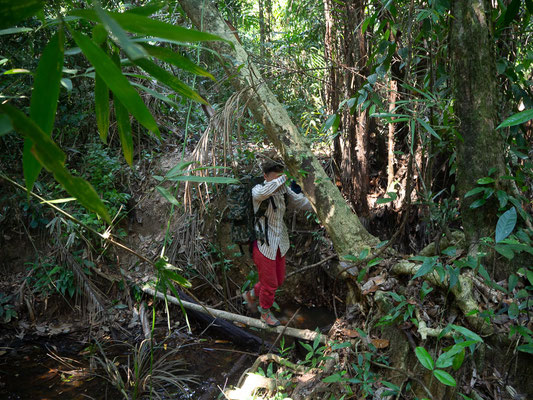 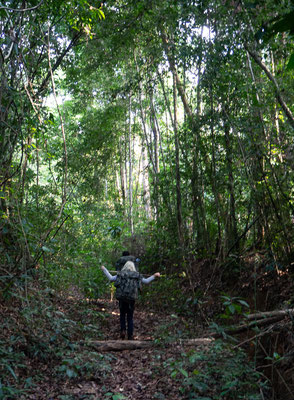 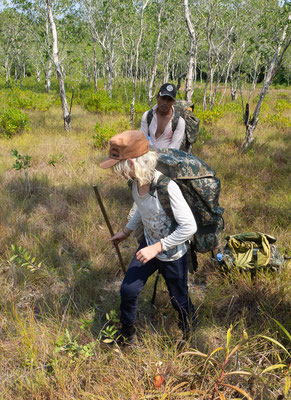 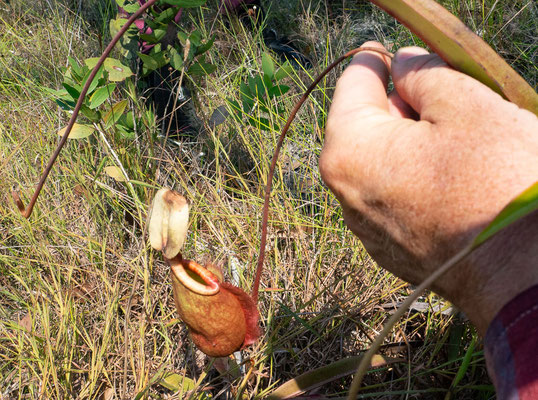 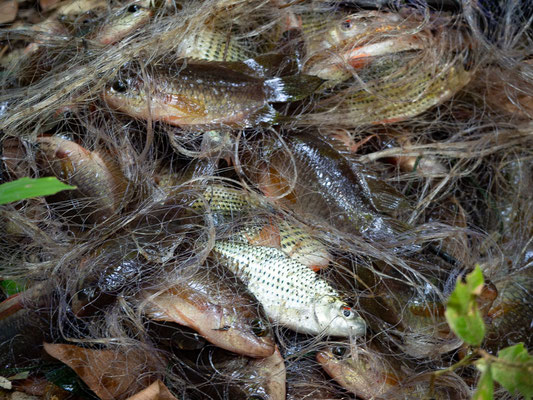 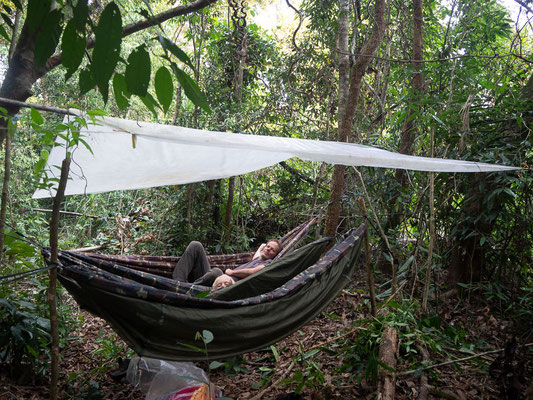 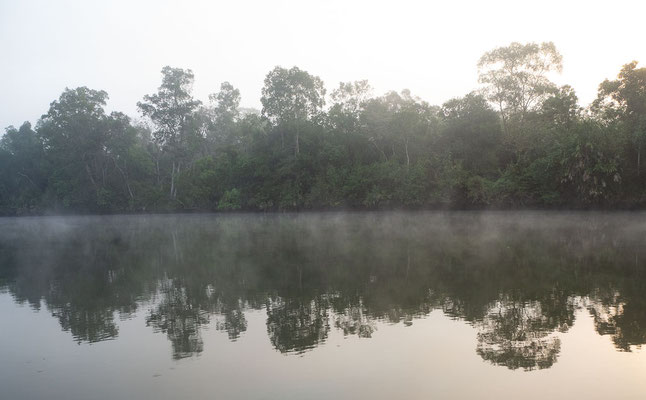 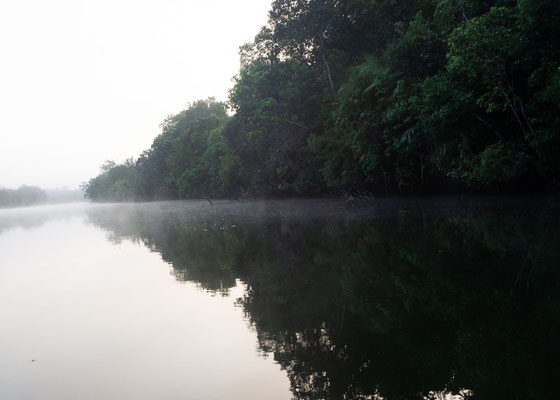 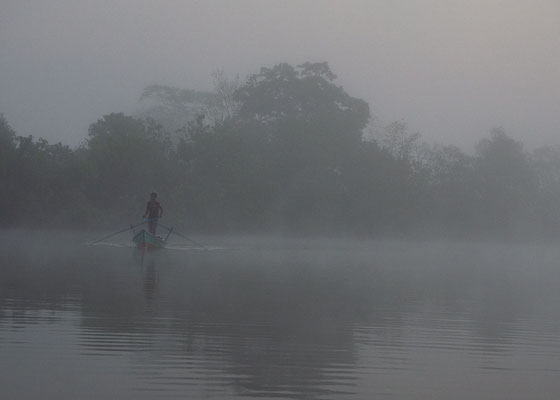