When you live in the Wimmera localish biketouring, is a bit challenging. But one of the trips that was always on the list is the Goldfields track, that straddles the Great Dividing Range from Ballarat to Bendigo for 200 and a bit Kilometres. It has been there for ever, we just never did it. Not really sure why, because it is a real delight.

·       We carefully checked the weather forecast (the chance of 45°C days with howling 80kmh northerly winds is real in Summer here) and took off quite short noticed, once perfectly mild Summer days were forecasted… we ended up riding the first day in freezing temperatures, horizontally flying sleet and a ferocious afternoon lightning storm. But hell, we started in Ballarat, it should not surprise. The other two days were mint. “Mint” is one of the new standard words in the family, introduced by Max, so I can now speak contemporary English, with a German accent.

The first day we cheated a bit, starting from Creswick, not Ballarat. We got punished immediately, because the splendiferous French bakery was still closed, and we started riding slightly depressed in rain and freezing temperatures.… Anyhow, it was a very nice ride, bits of gravel road, bits of fire trail and some cruisy single-trails. Perfectly signposted mostly uphill and no other soul to see for the whole day. On this trip Max got liberated from the shackles of panniers, so he had the most fun. Actually, it was a bit annoying, because he was trying to mono as much as possible, while Ellie and me, with full panniers, were trying to look like real bike-tourers. A frightening thunderstorm just before we reached Daylesford, a good coffee and a lousy pizza later, we were at sleep.

Next day was mainly single trail on very rocky terrain, up and down the gullies, past nice forests and old gold mining relics. Great riding, but very tough. We were quite surprised, it was Saturday, it was beautiful weather, but we encountered just one little group of hikers, that was it, the whole day. The final 10km downhill into Castlemaine are unique. It is a along an old water channel, built in the gold-rush era, that meanders down the hill. It was quite fast riding in parts, but you had to stay concentrated as it was a narrow path, with steep drops on both sides.

The last day to Bendigo is relaxed.  We had a quick stop at the Mountainbike park for Max to do some rounds and Ellie and me not. From Harcourt to Bendigo, it is mainly along the old water channel. In the beginning the channel is more of a concrete viaduct, and you get just glimpses of the water. It was sweet sailing, with Ellie and me chatting, while Max was riding 50m in front of us, working on his monos. Out of the blue he dropped his bike and jumped with all clothes into the channel. We simply thought that he had finally lost his mind completely, but he turned up with a wet and exhausted little Wallaby, that was floating down the water, with no way out. He got three full hero points for this one. The last kms into Bendigo are a bit dreadful. It goes on and on through a landscape, that looks so violated by the mining during the gold-rush, more than 100years ago. I like the box ironbark country in spring……any other time looks just broken.

We are going to do it again! 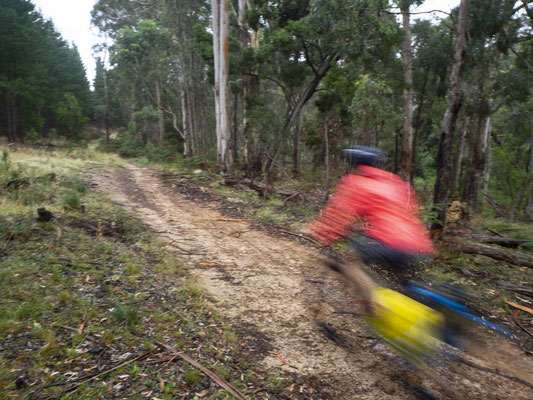 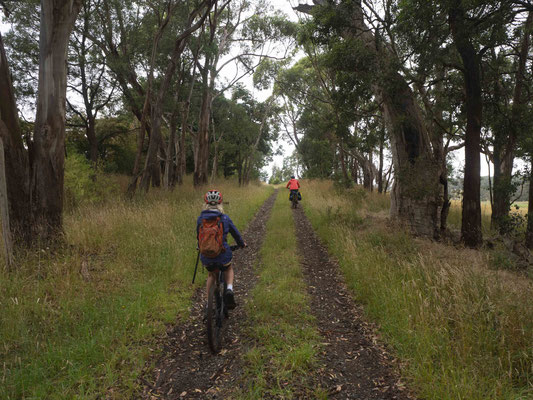 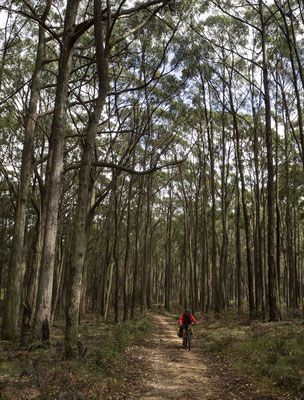 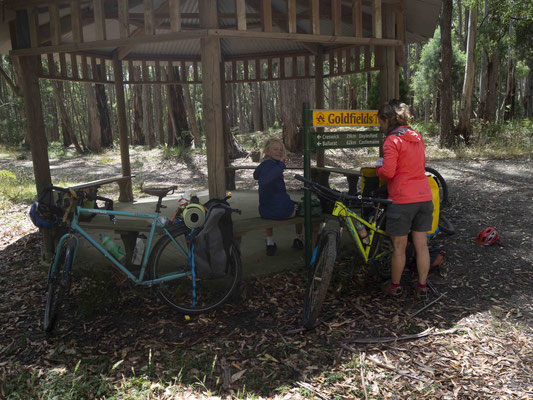 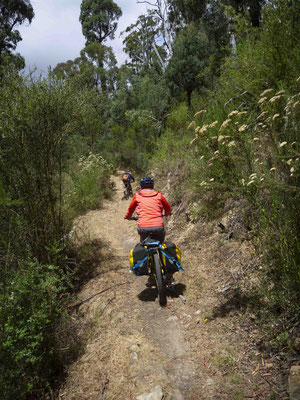 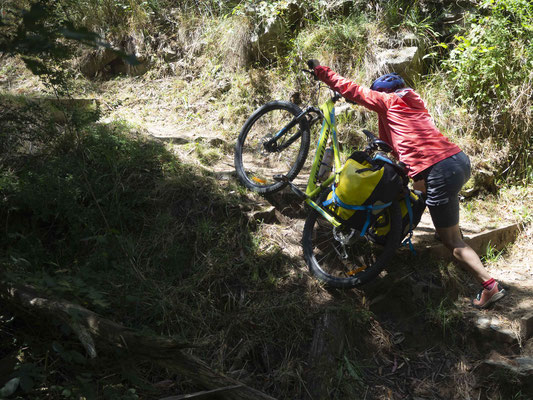 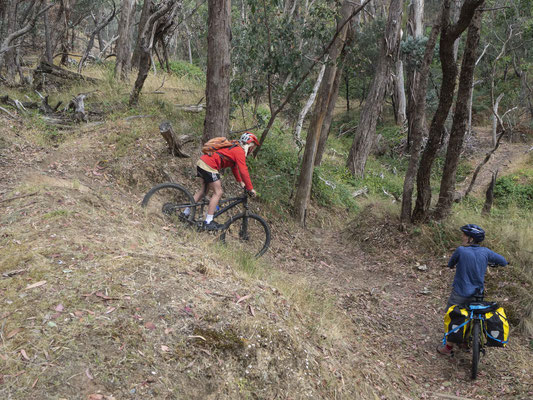 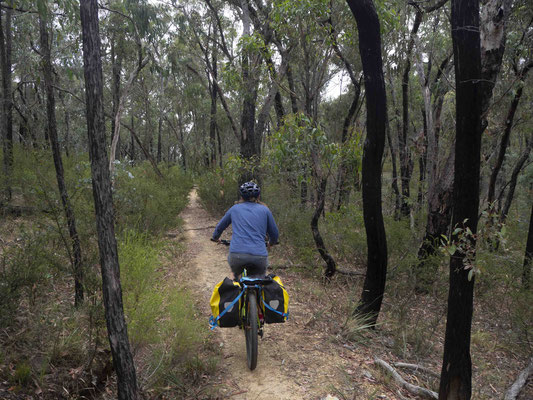 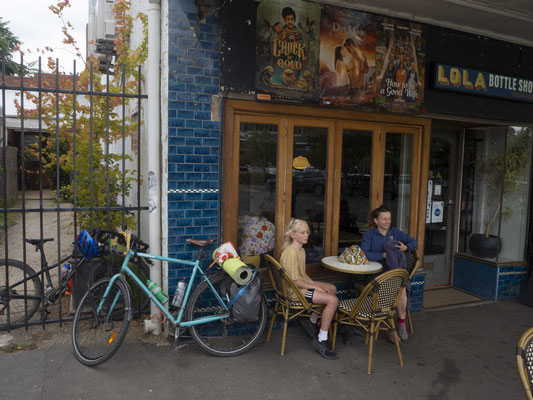 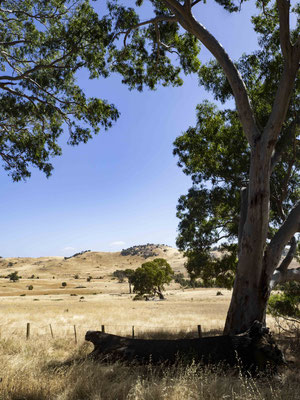 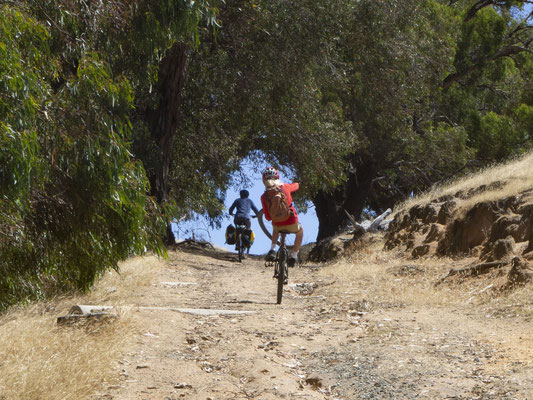 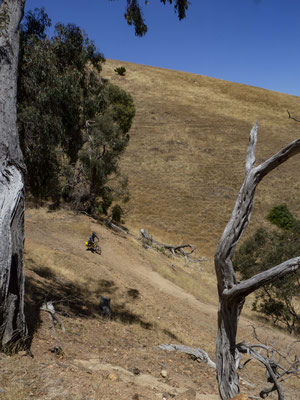